Ploductivity: A Practical Theology of Tools & Wealth by Douglas Wilson
My rating: 5 of 5 stars

“My optimism about tools and technology is, at bottom, an optimism about the future history of the world. And that, in its turn, is an optimism that is grounded on the fact that at the darkest point of human history, God in the flesh was crucified by arrogant sinners, by all the important people. Three days after that, the Lord came back from the dead. That means the old world has been overthrown. How could that world not be overthrown? That world is dead because its only power was death, and we serve a Lord who went into death’s maw, and then came out again. That is the ultimate plot turn. That is the central fact of all human history.” (Pg 103)

I’m exceedingly inclined toward the technophobia that Wilson rails against in this book. This was a helpful counterweight to my inclinations, and I’m thankful for it. It’s Wilson, so the style is breezy and a blast to read. It was written in a plodding manner, and occasionally that shows up in chapters that feel a little disjointed - like maybe they were written 100 words at a time…

On the whole, this is a book that I highly recommend. Wilson will say the whole thing hangs in his eschatology, which I don’t buy. But it does hang on the real and present Lordship of Christ over all things, and as Wilson helpfully reminds the reader, Jesus is Lord. Like, right now. So chill out, and enjoy, with glad suspicion, the wealth He has given.

October 11, 2014
I intend to be brief here. In recent days a young woman named Brittany Maynard has made headlines with her campaign for "death with dignity" laws, and for her moving to Oregon recently so that she might take advantage of theirs. Diagnosed with cancer at age 29, Brittany has decided to end her life on November 1st. Many people, including my fellow Christians, are distraught over this. Over her personal choice to end her life, and over the legality of doctors assisting her to do so in Oregon and four other states. That we have become a culture willing to celebrate self-murder, as it used to be called, is indeed very disturbing. I do not wish to argue those concerns, but rather applaud them. Exodus 20:13 is very succinct on this subject, "You shall not murder." We don't have the right to kill another person (we can discuss times of war and capital punishment another day). You also do not have a right to kill yourself. Why? Because our bodies do not fundamentally
Read more 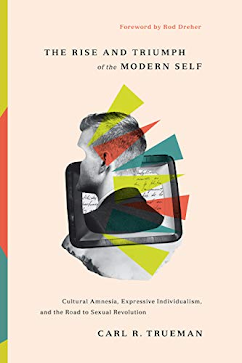 I like to read books, and people like to read Top 10 lists. In celebration of these two facts, here is my annual Top Books list for 2021. (previous lists: 2020 , 2019 , 2018 , 2015  ... yes, I missed a few years) Rise and Triumph of the Modern Self - I feel like a parody of myself for putting this book at the top of my list. Oh well, it's that important. Carl Trueman traces the modern conception of the self, beginning with Rousseau (a starting point he admits is mostly a function of having to start somewhere). He has a shorter and more popular-level version forthcoming . I will probably buy that to give to some folks, but if you want to contemplate how unusual our plastic understanding of personhood is, then pick up the original. The material is dense, but Trueman is an excellent writer, so reading through is an achievable task.  Hearers & Doers  - In this book, Kevin Vanhoozer gives pastors and church leaders a vision for building disciples fit for following Christ using the
Read more