In the Cross I Glory 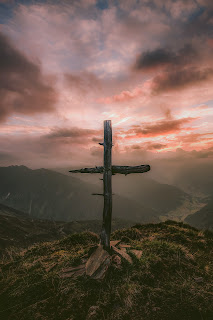 Photo by eberhard 🖐 grossgasteiger on Unsplash

Colossians 2:13-15, "And you, who were dead in your trespasses and the uncircumcision of your flesh, God made alive together with him, having forgiven us all our trespasses, by canceling the record of debt that stood against us with its legal demands. This he set aside, nailing it to the cross. He disarmed the rulers and authorities and put them to open shame, triumphing over them in him." (English Standard Version)

How do you see the cross? Do you look at it and see a place of defeat? Does it seem like the great tragedy of history? Paul tells us in Colossians 2 that the only defeat that day was suffered by Satan and his hordes. Not Christ. He triumphed at the cross. There he took the plan that Satan, and Judas, and the chief priests, and all the enemies of God meant for evil, and he turned them upside down. Instead of being defeated by death, he stole its power. "The sting of death is sin, and the power of sin is the law." Jesus fulfilled the requirement of the law that the unjust should die. He did that by going there in the place of all the unjust, taking their sin upon himself, and nailing it all to the cross. Their God poured out his wrath, the Son cried "it is finished", and death and hell were disarmed.

The cross was the greatest injustice, in human terms, to ever take place. But it was there, at what looked like the lowest moment, that God declared victory. For Jesus, the cross was not some unhappy accident. On the cross Jesus purchased a people for himself. What looked like the tree of shame was Jesus' throne of triumph. And so when we take the Lord's supper we proclaim the Lord's death. For there he purchased us with his blood.