Figs and the Kingdom 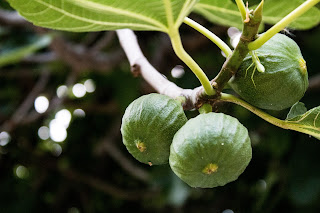 Photo by Martin Angelov on Unsplash

[the footnotes won't copy into blogger for me, most of the good ideas aren't mine, the Bibliography is attached]

One of the key elements of teaching on the kingdom of God in Scripture is the use of symbol, metaphor, and parable. One need only read the 13th chapter of Matthew to find comparisons made between the kingdom and

One recurring symbol in biblical teaching, coming up in the prophets, and then again in the teaching of Jesus, is the fig tree. The purpose of this paper is to examine some key uses of fig imagery in both the Old and New Testaments, and then to draw theological conclusions for how we might understand the purpose and function of that imagery.

What is a Fig Tree?

The place to begin is definition.

“Fig (Ficus carica), a fruit tree common in both wild and cultivated forms throughout the Near East since ancient times. It is a beautiful shade tree whose large palm-shaped leaves were said to have been used to cover the nakedness of Adam and Eve in the Garden of Eden (Gen. 3:7). The pear-shaped fruit, which is produced more than once during the year, has a high sugar content and is very sweet when ripe. It is eaten fresh or dried into cakes, which like those made from dates are storable and thus an ideal food for travelers (1 Sam. 25:18).”

As noted in the above quote from Achtemeier, this tree and its fruit were common. The preference of the Biblical writers for concrete imagery, imagery often drawn from the elemental experience of everyday life, then, means it is no surprise that this tree would make repeated appearances in discussions regarding the nation of Israel, as well as other Biblical teaching.

The Hebrew word תְּאֵנָה (teʾē·nā(h)), occurring some 35 times, is the most common word for fig in the OT. Moses tells us it was of fig leaves that Adam and Eve made their first loincloths, and the people of Israel complained of the lack of figs in the desert during their wanderings. The language of each man living under his own vine and fig tree is a common metaphor for prosperity. Douglas and Hepper write,

This use is significant, because within it we see the assumption that to be well-supplied with figs was in some sense synonymous with being well-cared for and receiving the blessing of the Lord. For instance, the prophet Joel writes that when “the LORD became jealous for his land and had pity on his people,” he declared, “Fear not O land; be glad and rejoice, for the LORD has done great things! …the tree bears its fruit; the fig tree and the vine give their full yield.” (Joel 2:18, 21, 22b). For God to allow the figs to produce was an evidence of his mercy and his kindness to the land (and, by implication, the inhabitants of that land).

The inverse of this was equally true. For the fig tree to be destroyed was itself a sign of God’s destruction and wrath upon the land. Again, Douglas and Hepper,

We see this fact illustrated clearly in Joel 1:7, when God sent a nation to punish his people, Joel 1:7, “It has laid waste my vine and splintered my fig tree; it has stripped off their bark and thrown it down; their branches are made white.” The theme is continued in 1:12, “The vine dries up; the fig tree languishes. Pomegranate, palm, and apple, all the trees of the field are dried up, and gladness dries up from the children of man.” In this passage gladness is sapped when the fig tree languishes.

Perhaps the most important use of fig language in the OT, at least in terms of theological significance in the New Testament, is found in the 24th chapter of Jeremiah’s prophecy. In that text the Lord gives Jeremiah a vision of two baskets of figs. These figs are described by the prophet in 24:3 as, “Figs, the good figs very good, and the bad figs very bad, so bad that they cannot be eaten.” The Lord then explains in the rest of the chapter that the vision uses figs as a metaphor for how he will view the people of Judah. Those who willingly go into exile (in obedience to the voice of the Lord, 21:9) can anticipate God’s ultimate rescue (perhaps tied to the coming of the Righteous Branch, 23:5-9). But those who stay in Judah and Jerusalem will be as figs so bad that they must be utterly destroyed.

The Greek words syke and sykon, fig and fig tree, respectively, occur a combined 18 times in the NT. Often they occur simply in a literal description, or in terms of a common analogy (cf. Mark 7:16, Luke 6:44, John 1:50, James 3:12). Our focus here will be upon the withering of the fig tree in Mark 11, and upon the parable of the fig tree in Luke 13.

In Mark 11 we find the well-known and often confusing story of Jesus withering a fig tree for failing to have fruit. The reason this has occasioned such confusion is that “it was not the season for figs” (Mark 11:13). On this point M. G. Easton is helpful,

“Our Lord’s cursing the fig-tree near Bethany (Mark 11:13) has occasioned much perplexity from the circumstance, as mentioned by the evangelist, that “the time of figs was not yet.” The explanation of the words, however, lies in the simple fact that the fruit of the fig-tree appears before the leaves, and hence that if the tree produced leaves it ought also to have had fruit. It ought to have had fruit if it had been true to its “pretensions,” in showing its leaves at this particular season.”

Likewise, Craig Keener, “If only leaves appeared, without early figs, that tree would bear no figs that year - early or late…Jesus is making a point about trees that only pretend to have good fruit (cf Jer 24).”

In between the incident of Jesus cursing the tree (Mark 11:12-14) and the disciples walking past it again to see the effects of the curse (Mark 11:20-21), Jesus had cleared the temple in what many commentators call a symbolic act of judgment against the nation of Israel and their empty worship. The fig tree, in this instance, is standing in as a symbol of the people of Israel.

Likewise, in Luke 13:6-9, there is the parable of the barren fig tree. This tree had gone three years without fruit. The patience of both the vineyard owner and the vinedresser are seen as the vinedresser asks for just one more year to try and get some fruit from the tree. Coming after Luke 13:1-5, the theme of which is the need to repent, this parable seems to be saying that God has indeed been patient. And so if he should choose to judge Israel it is not a result of his ill-temper or impatience, but rather of their hard-hearted condition. Like Mark 11, the tree had foliage and appeared to be living. But it bore no fruit, and thus deserved the judgment of being cut down (Luke 13:7).

To bring together what we see in both the Old and the New Testaments, the use of fig language is of course flexible. Often enough when we read of figs we aren’t to think of anything more than fruit on a tree, or a tree with really large leaves (Genesis 3:7). However, in relation to the kingdom what we see is that the temporary kingdom established through the people of Israel has come under judgment (Mark 11:12-21). However, this judgment is not necessarily forever, as God will have mercy on his people and land (Joel 2:22) and restore the fortunes of those who are “good figs” (Jeremiah 24:7). Likewise, this kingdom will broaden in scope, as part of the reason for judgment upon the fig tree of Israel was their failure to welcome in the nations (Mark 11:17), a situation remedied when the true vine and vinedresser welcome people of every tribe and people and nation to the eternal banquet (John 15:1, Revelation 21:3 cf. Jeremiah 24:7).