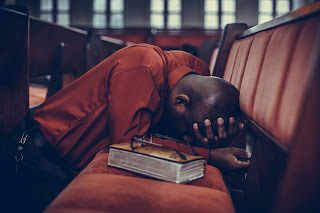 Photo by Samuel Martins on Unsplash

In his paper, “Thomas Aquinas’s Understanding of Prayer in the Light of the Doctrine of Creatio Ex Nihilo”, Rudi te Velde begins with the premise that to pray when one believes in an omnipotent God by whom all things were created and on whom all things - including prayer - depend, creates certain practical and philosophical problems which must be remedied. To put it as he does on page 50, “What is the use of prayer if God’s causality with respect to the world is from all eternity determined and not liable in any way to change?”

St. Thommy to the Rescue

To help walk through this issue, te Velde interacts with the thinking of Thomas Aquinas, particularly his work Summa contra Gentiles. Here Thomas distinguishes between primary and secondary causes. God is the only being or reality who exists outside of the created realm and is therefore the only primary cause. However, he chooses to act through secondary causes. These include, but are not limited to, prayer. Therefore, prayer can be a real cause in the real world, just not in the absolute sense that God himself is.

This is all dependent, te Velde points out, on Thomas’ conception of God as a “God of participation, of letting things share, from his own abundance, in being and goodness” (50). Thus, it is within God’s purview to allow things to be caused within what we might call time and space by other contingencies within time and space. However, there is a particular rub here with prayer, as prayer is petitioning God himself to intervene. And throughout Scripture, it seems he does just that. Both Jeremiah 18 and Isaiah 38 are brought forward as instances of such complexity (57-58). How are we to respond to these hard cases?
It would seem to me that the distinction between primary and secondary causes is helpful if we are careful to state that the reactions of God in time to changing contingencies of his creatures - for example, prayers of repentance - is not in any way an intrinsic change to God himself or to his will, but is the perfect application of his immutable person and purpose. Were the Ninevites, for instance, not to repent, it would have been consistent with God to crush them. But they did repent (at the preaching he sent), and thus he relented. Nothing in God himself changed. The creatures changed, and his response maintained perfect consistency with his immutable purposes.
Posted by C.W. Dole at 4:50 PM